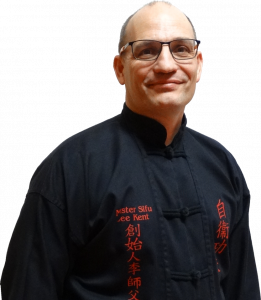 I began my training in 1984 within Boxing. I trained hard for 3-4 years gaining a title as Bournemouth Area Champion. During this time I found my true calling… Martial Arts!

I have been training in Martial Arts since 1987. During this time I have earned the grade of 4th degree black belt in a system known as ‘Bushido Zen-Shindo’.

I have also trained in other systems such as Kickboxing, Tae Kwon Do (a Korean Art), Systema (The Russian Special Forces Combat), Budo Taijutsu (a Japanese System) and Eskrima/Kali (a Philippines System), Alicaway Combat Knife Fighting and gained a number of belts and coaching qualifications in an array of other systems.

Since 1991, I have been developing Chi Wai Kung Fu with the main emphasis on practical self-defence. This system is constantly developing and, with the continued support of my instructors and students, we continue to strive for Chi Wai to become a widely recognised and respected self-defence system.

My aim is to continue to grow Chi Wai into a widely recognised and respected system taught in schools.

If everyone were taught the basics of Martial Arts and its underlining codes of Honesty, Integrity and Respect then the world would be a much nicer place.

“The only way to fully understand Chi Wai Kung Fu is to experience its endless pursuit of excellence.”

Bong Sau – This is a simple block, therefore, less that could go wrong. The Bong Sau has a huge range of practical uses from blocking a standard punch to defending against weapons and most counters can just flow from it. To sum up, the Bong Sau, in my opinion, is one of the most versatile blocks going.