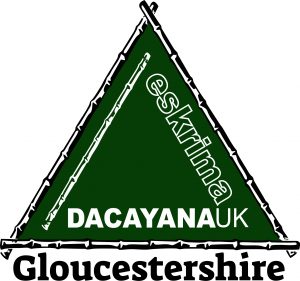 The Only Dacayana Eskrima School in Gloucestershire

Eskrima is a term for the indigenous Martial Arts of the Philippines. Eskrima is also known by the names of Escrima, Kali, Arnis or Arnis de Mano.

Different schools use their own terminology for their style, which varies from region to region. In the USA, for example, Kali is widely accepted as the ‘Mother Art’ (mainly due to the influence of Guro Dan Inosanto) but in the Philippines it is more usually Eskrima or Arnis that is seen as the correct name to describe Filipino Martial Arts (FMA).

The Filipino Martial Arts have evolved over a period of 500 years. It is only in recent years that Eskrima is becoming popular in the UK having largely remained undiscovered for all this time. Filipino Arts have proven to be very effective in real-life situations and are used extensively by many of the world’s elite Military forces.

Eskrima is different to mainstream Martial Arts systems as it trains students from the beginning in the use of and how to defend against weapons such as knives and sticks – situations that unfortunately are becoming increasingly more relevant in today’s violent society.

The art of Eskrima develops a wide range of skills and attributes within all of the fighting ranges.

These include but are by no means limited to:

Dacayana UK was founded in 2006 by Marcie Harding.

In 2012, Dacayana UK was renamed Dacayana UK & Europe in recognition of new European coaches starting to teach the system. Today, the Dacayana family has expanded around the world including the USA, India, Ireland, France, Italy and beyond – proving it to be an outstanding and popular Eskrima system.

Marcie Harding has trained since the early 1980s and began her FMA training in 1997 and has been running her own FMA group since 2003.

Marcie wanted to enrich the current FMA offerings in the UK and allow the Dacayana students to have access to pure lineage directly from the Philippines.

Filipino Martial Arts (F.M.A) is particularly relevant in the Chi Wai Kung-fu Academy as Chi Wai literally translates to ‘Self-Defence’ and Dacayana Eskrima encompasses the direct skills required for self-defence application. This perfectly complements the Chi Wai Kung Fu system BUT also enables the Dacayana system to be a perfect standalone art in its own right!

For example, the weapons skills can be used with something as simple as a rolled-up magazine, a pocket stick, a simple bar and many other items that can easily be found lying around. Eskrima also teaches us unarmed or empty-handed techniques.

With these skills all rolled up into a safe training environment, this is why Dacayana is a great standalone system or addition to almost any other Martial Arts system there is.

Here at the Chi Wai Martial Arts & Fitness Centre, we have decided that as this system is so complementary to our thoughts, teachings and ethos that we would add it into our academy timetable and teach it to anyone who would like to learn. Either practised in addition to Chi Wai Kung Fu or for students with more limited free time, this system can be learned on its own, making it a fantastic addition to our timetable.

Our academy is the only Martial Arts club in Gloucestershire to be qualified and registered to teach Dacayana Eskrima. Making this an exciting opportunity to come along and see why Dacayana Eskrima is one of the fastest-growing FMA systems in the UK.

These are not exclusive to the Filipino Martial Art, but they are rare in other Arts. Perhaps the best-known sensitivity and flow drills from other arts would be Wing Chun’s Chi Sau and Tai Chi’s Push Hands.

In FMA, these drills are more numerous and these training methods seem to set the Filipino Arts apart from most other Arts, allowing the drills to easily be incorporated in empty hand, sticks/canes, dagger(s) and even the Pinute (an FMA short sword).

Normally made of rattan and between 26–29″ long (some styles including our Dacayana system use longer sticks up to 32-34″ in length).

Other materials are used for heavier weapons – Bahi and Kamagong are two hard, heavier woods that are often used.

The ‘live hand’ is the hand without the weapon in it! If you are holding two weapons then it is the hand with the shortest weapon. This hand is used as a secondary weapon (striking if the empty hand) and for additional control of an opponent. Also developing dexterity and co-ordination during training.

Most Filipino systems use angles of attack within their systems. Many systems have 12 angles for their students to work from. Even though many of the angles are common across different systems, almost all of the systems have a different order in which they are used, meaning there is no standard set.