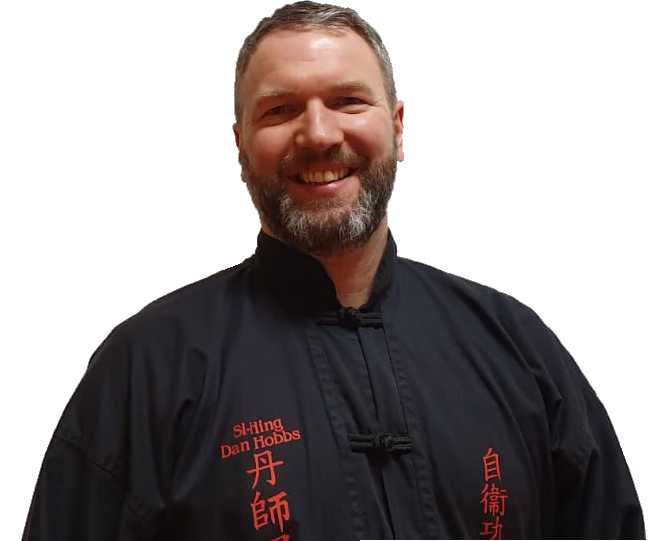 Other than just over a year training in Wado Ryu Karate when I was eight, Chi Wai Kung Fu is the only Martial Arts school with which I have trained. I’ve been with Chi Wai since 1999 and, in 2006, achieved my Black Belt and became an instructor.

Becoming an instructor began with me assisting the other instructors during my training as a Brown Sash and has now progressed to taking my own lessons since 2009.

I have found teaching to be a rewarding experience, expanding my understanding of Martial Arts and developing new skills that I wouldn’t have gained by training alone.

Back in 1999, I found the prospect of starting Martial Arts intimidating. My brief experience and general opinion was of a very strict, joyless activity, focused on aggression and attacking. Training was something to be endured rather than enjoyed.

Chi Wai changed my opinion, geared toward self-defence and self-improvement as well as being relaxed and goodnatured, while still maintaining the discipline of a Martial Arts system.

Chi Wai has been and still is a very positive influence in my life, giving me confidence and motivation in all areas; Martial Arts, work and personal.

As well as this, I feel there is a great sense of community within Chi Wai, where everyone is made to feel welcome and included and people are happy to lend a hand or help out.

Using the momentum and focus from the new dojo in 2007 and lessons, I hope to continue with the progression of my own training as well as continually developing and improving the way we teach our students.

As I said above, instructing has been a rewarding experience, and there’s nothing better than seeing someone progress, be it through our system, in confidence, or other personal goals.

Pak Sau – Quick and effective, which can lead you inside an opponent’s guard.

Learning Eskrima, although not really a single technique, is also a current favourite as it is a whole new discipline in which I can develop into, and having a stick (or two) always helps.